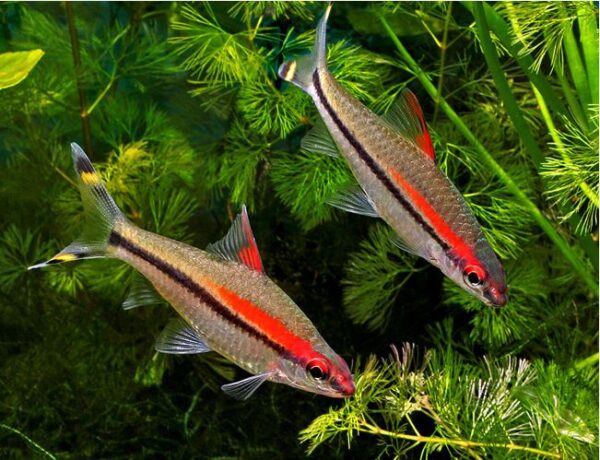 This species was first described in 1865 and is endemic to Kerala and south Karnataka in the southern area of India often referred to as the Malabar Coast. They are found in large schools in pools, streams, and rivers that are generally heavily vegetated and rocky, with water that is highly oxygenated.

This barb is an example of what can happen to a species that is wild-caught and suddenly becomes in high demand. After being named as one of the top new fish species by Aquarama, the international ornamental fish exhibition, this fish quickly became quite popular. Within a decade, well over half of all ornamental fish exports from India were denison barbs. Unfortunately, the result was a significant drop in wild populations due largely to overfishing.

Loss of natural habitat as the result of human pollution and deforestation has also contributed to the reduction of this species in the wild. Efforts have been made to counter this by instituting periods when collection is not allowed, as well as commercial breeding programs in Southeast Asia and Eastern Europe. However, this fish still remains endangered and is on the

Long and torpedo-shaped, it is easy to see why many call this the red lined torpedo barb. The silvery body of this fish is set off by a black line that runs the entire length of the body from snout to tail. This is contrasted by a brilliant red line that runs just above the black line, running from the nose through the eye and continuing to the midpoint of the body. The dorsal fin is also edged in bright red, while the caudal fin is striped with black and bright yellow stripes. Mature specimens are known to develop a greenish hue on the head.

Reaching an adult size of six inches, this species has a pair of barbels that help them locate prey. In recent years, a gold variant has been bred that has the red stripe but lacks the black stripe of the wild variety.

Denison barbs are generally peaceful, but when they are kept in less space than they require, they will aggressively compete with other species at feeding time. They are not fin-nippers, but care should be taken to keep them with species that are similar or larger in size.

They should be kept in schools, of a half dozen or more. As a result, they are best kept only in large tanks of 55 gallons at a minimum. Other barbs, danios, larger members of the tetra family, rainbow fish, and most cichlids are suitable tank mates. The key is to keep them in a school and provide them with plenty of space.

Because this species quickly grows to be quite large, they quickly outgrow even 55-gallon tanks. A sufficiently sized tank should have plenty of room for free swimming of some distance, as these are an active fish that needs to be on the move.

Some hiding places are also recommended; rock caves or driftwood can be used.  can be problematic, as they may be uprooted by darting denison barbs. However, hardy species such as  can be used, if well anchored.

This species is accustomed to high oxygen levels and pristine water. High levels of organic matter are not tolerated well, which means regular water changes and  are key to keeping this species healthy. Some  is necessary, which can be provided with a spray bar or  Water temperatures can be lower than for other tropical freshwater fish; however sudden drops in temperature must be avoided.

Denison barbs are omnivorous and will accept many foods. For optimal health, they should be fed a wide variety including meaty foods as well as vegetable matter. Live foods will be readily accepted, including  daphnia, , and shrimp. Algae, spirulina, and even fresh vegetables will also be readily accepted.