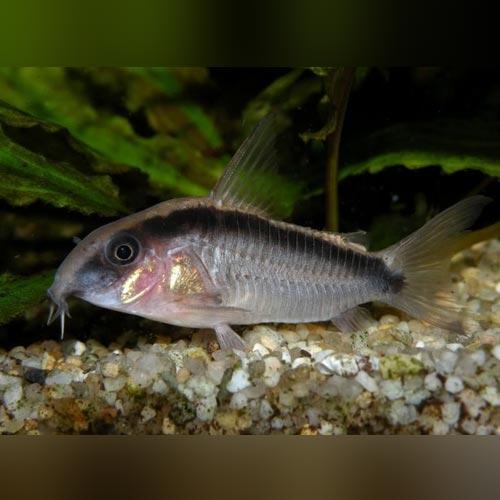 So-named because of its striking black arched markings, the Skunk Corydoras is a firm favourite with many. Ideally suited to mature softwater aquaria, this sociable species should be kept in groups of 5 or more. Unfortunately, this species is very prone to barbel infections/erosion, so it is of paramount importance that the fish are kept on a soft sand substrate (rather than gravel where waste can build up unseen) in order to protect these delicate sensory organs. Regular maintenance, including frequent partial water changes, should be carried out in order to keep these fish in good condition. The aquarium itself should be aquascaped with ample shady hiding spots underneath pieces of bogwood and plants. Large shoals of small midwater ‘dither fish’ will encourage your Skunk Cories out into view more often. Other peaceful species such as some of the smaller fish from the pencilfish, tetra, and rasbora families make ideal tankmates. Corydoras have the ability to breathe air intestinally, so a small gap should be left between the surface of the water and the cover slides in order for the fish to come up to the surface and take air in. It may do this numerous times per day. This species has been misidentified as arcuatus for the last sixty years – it may be some time before exporters and labels catch up.

This species can be a little more challenging to breed than many other Cories. Mature pairs can be triggered into spawning by performing a large, slightly cooler water change (some reports suggest bringing the water temperature down to around 16 deg C). The pair should adopt the classic ‘T position’ where the male fertilises the eggs that are held between the female’s pelvic fins. The adhesive eggs will then be deposited onto plants, décor, or the sides of the aquarium etc and the process repeated. The eggs generally take 3-4 days to hatch after which time the tiny fry should be offered finely powdered first foods. A few days later they will be able to take newly hatched brineshrimp. To avoid predation and ensure a higher success rate, many fishkeepers move the parents to another aquarium after the eggs have all been deposited.