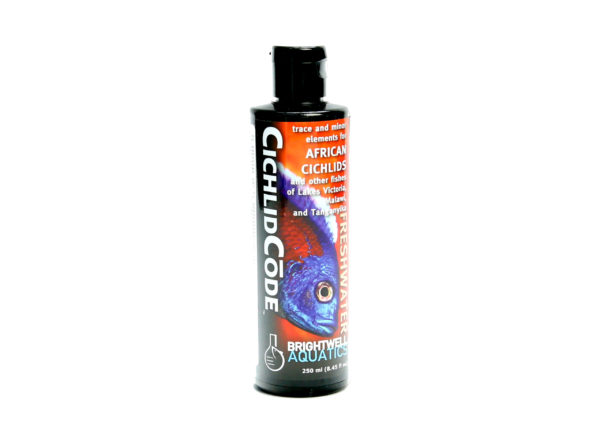 Detailed information
Trace elements and trace elements play a key role in the neurological and metabolic processes occurring in cichlids and other fish, and are often one of the fundamental components that are part of the structure of the biological pigment responsible for enhancing fish’s coloration. What’s more, these elements can affect the mood and reduce aggression in fish, and the often observed effect in cichlids displaying unwanted aggression is sedation.

CichlidCode is not intended to modify the behavior of fish, however, such changes may occur in some of them. The product is perfect for people who fish in the cichlid family. Supplementation with trace elements and trace elements during each water change is an effective way to provide the necessary substances to ensure optimal living conditions for fish.

The vast majority of East African cichlids bred by aquarists are derived from Lake Victoria, Lake Malawi and Lake Tanganyika.

Lake Victoria is a large, but relatively shallow, reservoir of tectonic origin. Compared to Lake Malawi or Lake Tanganyika, it is characterized by lower electrolyte conductivity, lower carbonate hardness and lower pH, which is probably related to the low salinity of the main source of water supply in the lake.

Lake Tanganika is also located in the Rift Valley, however, the large amount of water that flows into it comes from salt springs and tributaries rich in carbonates of volcanic origin. Of the three lakes, Tanganyika has the highest average electrolyte conductivity, the highest carbonate hardness and the highest pH. Cichlids caught in the wild and originating from these lakes can gradually adapt to the conditions in any of them, even if they are not endemic to a given body of water.

Avid lovers of these fish often try in their aquariums to reproduce the parameters of water in a way as close as possible to those prevailing in the natural environment of cichlids, regardless of whether their aquariums contain fish caught from their original environment, or fish already bred in tanks.

Instructions for use
Shake well before use.

Biotope aquarium: The chemical compositions of the water in the lakes Victoria, Malawi and Tanganyika differ significantly from each other. Therefore, it is reasonable to use different doses of the preparation, depending on in which of the three lakes the cichlids previously lived. Use the recommended doses as general guidelines for your biotope aquarium, increase or decrease the dosage if necessary after observing the appearance of the fish and analyzing the conditions in the aquarium.

Lake Victoria: Pour 0.25 ml (approx. 5 drops) of the preparation into approx. 94.64 l of aquarium water once every two days.

Lake Tanganyika: Pour 0.75 ml (approx. 15 drops) of the preparation into approx. 94.64 l of aquarium water once every two days.

It is good practice to start supplementation at the level of ½ of the doses recommended above, and then gradually increase the dosage over the following weeks, where no previous supplementation with trace elements and microelements. This will not pose a threat to the inhabitants of the aquarium and will allow you to observe subtle differences in the appearance of the ecosystem, making it easier to assess the effectiveness of the preparation.

Although micronutrients and trace elements are necessary for certain biological processes to occur, excessive overdose can be harmful to fish. Microelements and trace elements become inaccessible in aquariums mainly due to adsorption to organic matter molecules. Therefore, aquariums in which large amounts of often invisible organic material occur may require a slightly higher dosage of the preparation to compensate for those elements and microelements that undergo the binding process. The use of activated carbon removes trace elements and microelements both passively and actively, which is why the preparation should be dosed only after using a carbon filtration medium.