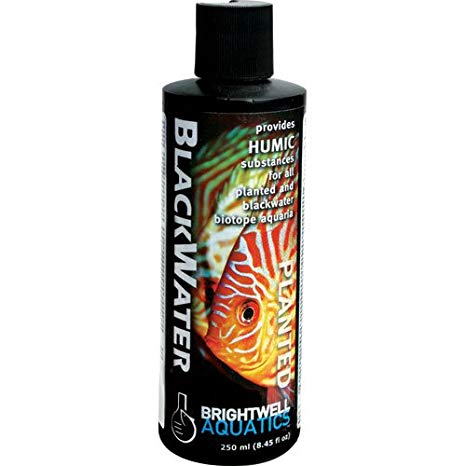 Product description
A complex of humic compounds for all plant and biotope black water aquariums.

General information
Establishes similar water conditions to black water rivers, many of which are inhabited by important fish and aquarium plants.
The preparation can be used as a means supporting the simulation of the beginning of the rainy season, thanks to which it supports fish activity during spawning.
Is a source of humic compounds (fulvic acid and humic acid) and a complex of bioorganic molecules that increase the absorption of important nutrients (such as iron, calcium, magnesium, molybdenum, copper, manganese, zinc, cobalt and nickel) by plants, thus potentially increasing the effectiveness of preparations supplementing nutrients.
The formula was created based on data from extensive research on the needs of aquatic plants for nutrients and the analysis of chemical parameters of river waters.

Detailed information
Humic compounds are natural derivatives of organic compounds present in soils and, more importantly (from the aquarist’s point of view), many streams and rivers located in wooded areas. They consist of humic and fulvic acids, which are a product of the natural decomposition of proteins, carbohydrates, lipids and lignin of plant and / or animal origin. A characteristic feature of humic compounds is their deep brown color, which is responsible for the color of the soil.

Soluble humic compounds significantly increase the absorption of multivalent cations (many of them are important nutrients for plants) by creating temporary bonds with these ions and making their uptake by plants more direct. Thanks to this, water care products in plant aquariums containing these ions are more effective.

The rivers of black waters got their name from the color of the water, whose shades range from light brown to dark brown (due to the presence of humic compounds), and which is actually transparent. In the Amazon and Orinoco catchments, as well as in the forested areas of Southeast Asia, there are many important black river rivers that are inhabited by many families of significant aquarium fish. Black water biotope aquariums are therefore extremely attractive and desirable, especially if aquarists try to breed fish from these areas.

Gradually increasing the concentration of humic compounds in the aquarium is an effective method of stimulating fish to spawn, especially those of the genus Symphysodon (discus fish), red neon lights and other fish inhabiting such rivers of black waters as the Brazilian river Rio Negro. Generally, the humic compound concentration increases significantly during heavy precipitation and / or floods (e.g. during the rainy season). At the same time, fish inhabiting many river systems undergo spawning.

The use of BlackWater by Brightwell Aquatics causes a slight acidification of the aquarium water and changes its color in proportion to the dose used, the amount of water in the entire tank and depending on the type of chemical filtration used. In general, the higher the dose, the more significant the water color change. What’s more, as a result of the action of humic compounds that cause natural chelation, BlackWater softens the water. The above environmental conditions and chemical characteristics of water are the signal used by fish for the beginning of the spawning season.

Instructions for use
Chemical filtration media that aggressively absorb organic compounds (such as macroporous resins) quickly remove humic compounds from aquarium water, which is especially useful when you need to get rid of these substances from the tank. The use of BlackWater prevents this process. Activated carbon, in turn, has limited effectiveness in this matter.

Basic use of the preparation: Use 5 ml (one cap) of BlackWater for every 75.7 l of aquarium water once a week. Using the above recommendations, 250 ml of the preparation is enough to treat approx. 3,785 l of aquarium water. If necessary, the dose can be increased to achieve a specific water color or to increase the degree of absorption of some nutrients by plants (details below). In general, more frequent, daily use of the preparation in appropriate doses allows you to maintain a more stable and natural environment than the less frequent, weekly dosing, during which the amount of nutrients in the water reaches its peak only just after the administration of the preparation and gradually decreases in the following days of the week.

Daily dosage: use 6 drops of preparation for every 75.7 l of water a day. After 3-5 weeks, adjust the dose depending on the appearance of the reservoir and the perceived need for nutrients.

Pouring BlackWater directly into the water to be used for substitution, especially if water changes are carried out daily, can give the best results. Using this method, pour in the right amount of BlackWater once for the entire aquarium system on that particular day. An increase in water temperature and an increase in live food, in conjunction with the above dosage recommendations, often stimulate fish to start spawning.