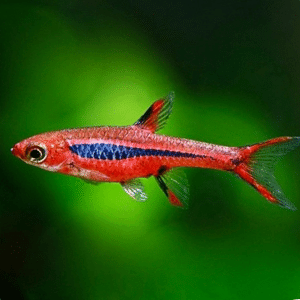 The beautiful, diminutive Chilli Rasbora is known only from heavily-vegetated, peat forest swamps in southern Borneo, Indonesia. These fish are an ideal choice for small, heavily planted softwater aquaria. The tank must be mature and have myriad of hiding places amongst driftwood and thick vegetation, which should include floating species to help diffuse the light. Filtration should be good but water movement gentle. These peaceful shoaling fish can be rather timid, so a decent sized group of 12 or more will help them to feel more secure. A larger group will also result in a more effective, natural-looking shoal, with males displaying their best colours as they compete with one another for female attention. Tankmates, if desired, must also be small and peaceable; for example, small Caridina and Neocaridina shrimp, Kuhli loaches (Pangio spp.), Otocinclus catfish, pygmy Corydoras spp., Eirmotus octozona, Trigonostigma spp., and Blue Eyes (Pseudomugil spp.) could all be considered suitable. Much attention must be paid to water quality since Chilli Rasboras are somewhat delicate and do not tolerate elevated nitrates or swings in water chemistry. Acclimatise very carefully. This species is very similar in appearance to its congener B. urophthalmoides, the Spice Rasbora; these two species being the only members of the genus that possess a dark lateral body stripe. However, they can be told apart as follows: B. brigittae attains a larger adult size and displays an insignificant dark blotch on the caudal peduncle (vs. very obvious caudal blotch in B. urophthalmoides) plus B. brigittae tends to be a brighter red colour overall. In some cases, the lateral dark stripe on B. brigittae is broken rather than one solid line, and sometimes the tiny caudal blotch is absent.

Small frozen foods such as baby brineshrimp, mini-bloodworm, cyclops, and daphnia, plus crushed flake and micropellets.

B. brigittae belongs to a group of fish that are known as continual spawners, which is to say that in the case of mature fish, small numbers of eggs are laid daily. In densely planted aquaria with large groups of well-conditioned B. brigittae, spawnings should occur regularly with eggs being scattered over vegetation and decor. The eggs and resultant tiny larvae will be seen as food by the adults, but if there is plenty of plant cover, some should survive into adulthood. If a greater number of fry is desired, a separate bare-bottomed breeding aquarium (with air powered sponge filter) should be set up with plenty of Java moss/spawning mops and a layer of mesh raised a small way from the tank bottom so that any eggs that fail to adhere to the plants/mops fall through to safety, away from the adults. The water conditions should match that of the main aquarium. Carefully add one or two well-conditioned pair/s of B. brigittae, and once settled they should spawn the following morning. It is recommended that the adults are moved back to the main aquarium within 48 hours as the first eggs will be starting to hatch by then. The miniscule fry will feed off their yolk sacs to begin with, but will soon require suitably sized foodstuffs such as infusoria and Paramecium, moving on to slightly bigger foods such as Artemia nauplii as they grow. A variety of foods may be needed for a while as you may end up with fry of slightly different sizes from the 2 days of continual spawning. Small partial water changes must be carried out with the utmost of care to avoid shocking the extremely delicate fry.