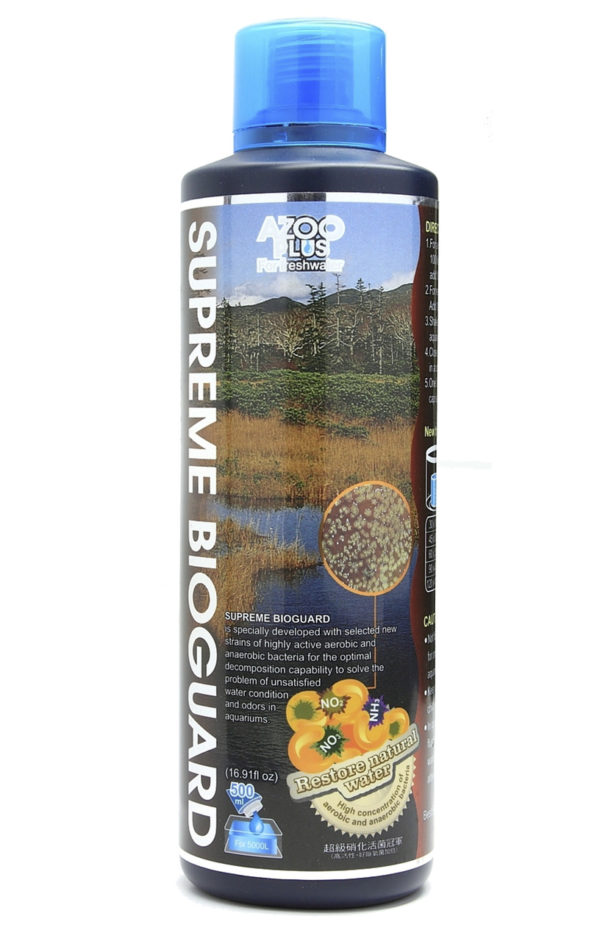 EXCELLENT AND COMPLETE ECO-SYSTEM IN 1 BOTTLE!

PHENOMENAL DISTRIBUTION CAPACITY
SUPREME BIOGUARD has been specially developed from selected, new, highly active strains of aerobic and anaerobic bacteria with optimal degradability, in order to solve the problems of unsatisfactory water quality and bad smell in a freshwater aquarium.

PERFECT PROTECTIVE MECHANISM FOR FISH AND FILTRATION SYSTEM
1. The use of the latest biotechnology provides an ideal protective mechanism for fish and filter systems in the aquarium.
2. Effectively and quickly breaks down organic compounds, ammonia, nitrites, nitrates and hydrogen sulfide.
3. Forms dominant and useful bacterial colonies in the aquarium in order to inhibit the development of pathogens.

OPTIMAL CONCENTRATION OF BACTERIA STRAINS
We guarantee that each milliliter contains one billion (1,000,000,000) bacteria that remain fully active for the best results.

Supreme Bioguard is a modern bacterial preparation, having no equivalents, which solves dozens of problems in a freshwater aquarium, acting 100% naturally, biologically! The most modern bio-technology of the AZOO brand and focusing exclusively on fresh water in this project has contributed to the creation of a product that works almost as effectively as strong chemical preparations. Supreme Bioguard is a huge and unrivaled product for competition. Supreme Bioguard should be used regularly to improve water quality both chemically and visually for our eyes in every freshwater aquarium. Supreme Bioguard was tested before the premiere in our test aquarium for 2 months from the beginning of February to the end of March. The aquarium with a small cast did not require a water change at that time. Toxic nitrogen compounds were not measurable at the standard product dose.