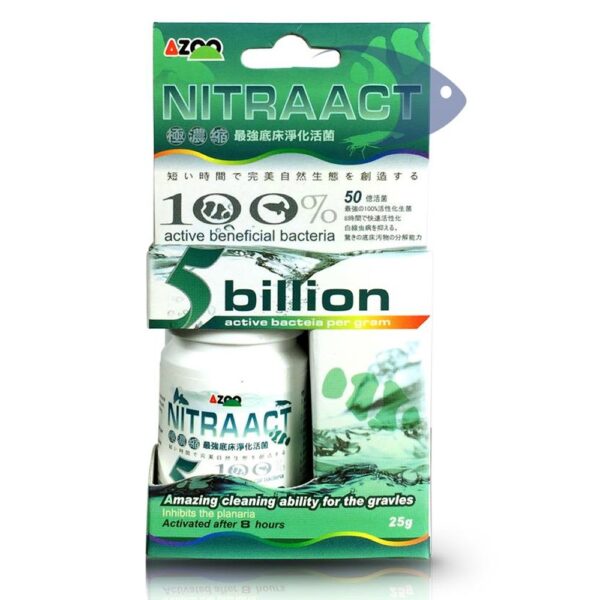 Only 1 left in stock

Product description
NitraAct is the highest quality, specialized, multi-purpose cultures of denitrifying and photosynthetic bacteria. Specialized strains of bacteria act intensively in the medium and filtration systems. The main purpose of these bacterial strains is to quickly remove masses of pollutants in the substrate and filters, and to remove poisonous substances such as hydrogen sulphide. The preparation quickly cleans the substrate from residual remains, feeding residues, fish excrement, silt as well as filters of sludge and organic dirt, by quickly decomposing these residues, which are a breeding ground for bacteria.

Regularly stopping the preparation visibly improves the cleanliness of the substrate and significantly reduces filter clogging. Hydrogen sulfide forms in the anaerobic zones of the substrate and bursts into the water column, damaging fish and crustaceans. The visible signs of the formation of hydrogen sulphide are: sand blackening, blackening and rotting of plant roots, gas bubbles escaping from the substrate, very often associated with the death of the fish. The bacteria contained in AZOO NitraAct effectively remove it from the substrate and water. Additionally, AZOO NitraAct breaks down poisonous ammonia (NH3), nitrites (NO2) and nitrates (NO3), which are formed on an ongoing basis in the aquarium from fish excrements and decomposing organic residues. Regular use of AZOO NitraAct allows for long, long-term aquarium maintenance on one substrate, without fear of hydrogen sulphide toxicity and visibly reduces the need to clean the aquarium.

AZOO NitraAct consists of the highest number of strains of strong anaerobic bacteria for maximum effect. The bacteria contained in the preparation are dormant and occur in the highest possible concentration of 5 billion per 1g.

Application:
NitraAct should be used to remove hydrogen sulphide and nitrogen from water, restore and maintain the highest cleanliness of the substrate and filter system in the following situations:

in a new aquarium **
in an already operating aquarium after a water change ***
after each filter cleaning
during (daily) and after treatment of fish ****
in overstocked aquariums to accelerate the decomposition of poisonous ammonium, ammonia and nitrites, as well as nitrates *****
* The power of ammonia and nitrite decomposition is increased when AZOO NitriPro and AZOO NitraAct are used, as the two preparations contain different strains of bacteria.
** Avoid excessive water changes and cleaning of filters (sponges) during the first month of the aquarium’s life to minimize the loss of multiplication of bacteria. We recommend that there are several fish in the aquarium that will generate the ammonia necessary for the bacteria to live. A complete bacterial bio-system will be established after about a week, after 3-4 applications of NitraAct or NitriPro
*** After changing the water, you can easily double or even triple the dose of the preparation.
**** Chemical treatment can damage or kill whole colonies of bacteria. In order to avoid ammonia poisoning during treatment, we recommend that you use increased doses of bacteria every day, and after the treatment cycle, apply several times, as when setting up an aquarium.
***** In the event of severe distillation, in order to improve the water quality, it is permissible to increase the weekly dose or to apply additional, more frequent application of powdered bacteria.

Description:
Made of a concentrate of dormant powdered bacteria in a dry environment and low temperature, with the highest quantitative ratio of bacteria, the activation of which takes place after 8 hours from application to water.
It consists of several species of anaerobic multifunctional bacteria in the amount of 5 billion (5,000,000,000) active bacteria per gram of preparation.
It quickly breaks down the residual mass of impurities in the gravel and filter, eliminates unpleasant odors. Makes gravel and filters return to the state of the highest cleanliness.
Eliminates toxic hydrogen sulfide.
It is effective in inhibiting the growth of planaria.
It contains special nutrients. It helps bacteria multiply quickly and absorbs pollutants from the water.
Directions for use:
Add 3 grams per 250 liters of water when installing a new tank.
Then use 1 gram per 250 liters of water once a week.
It is recommended that you mix the powder well in a little water in a bottle before adding it to your aquarium. For best results, evenly add the mixed powder to the aquarium water, filter and filter media.
It is recommended to use Azoo NitriPro and Azoo NitraAct simultaneously for the best water purification effect.
The set includes a measuring cup for quickly measuring 1g.
Ingredients:
Euryhaline bacteria, denitrifying bacteria, Bacillus subtilis compound, photosynthetic bacteria, and other active anaerobic bacteria.

Comments:
The preparation contains a nutrient medium for bacteria, so it will be visible after use.
Larger doses of the preparation can be used in situations of water change, or when the water quality is very low and requires cleaning.
For the best effect, we recommend the simultaneous use of “NitriPro” and “NitraAct”
Store in a dry, cool place. Avoid moisture, sunlight and high temperature.

The preparation is not intended for human consumption. Only for ornamental fish and aquarium environment. Keep away from children and pets.
Bacteria in the aquarium:
Fish and crustaceans are very sensitive to the harmful effects of nitrogen compounds, especially ammonia, which can decimate aquarium life. Usually, this problem goes unnoticed in aquariums until the charges die. Sensitivity to nitrogen compounds depends on the species, e.g. delicate farmed shrimps die with minimal amounts of ammonia, and the average amount of nitrogen impairs the vital functions of discus fish.

The well-being and proper behavior of fish is a determinant of the proper functioning of a small ecosystem, which is an aquarium. When the fish behave unnaturally, it means that the biological balance in the aquarium has been disturbed. In order to prevent this, the level of nitrogen compounds in the water should be checked regularly. It can be checked easily and quickly with the AZOO NO3 TEST, AZOO NO2 TEST, AZOO NH4 / NH3 TEST tests. Just because the fish are alive does not mean they are doing well. Usually, smaller amounts of this poisonous compound, which are not yet able to kill fish, impair their vital functions, such as: reproduction, approach to spawning, food intake, vitality.

Every farmer has had a situation where fish suddenly died several pieces at a time from one species. Usually it is preceded by great timidity, stress, hiding “in the corners”. Very often the reason is a bad biological balance and an excess of nitrogen and hydrogen sulphide build-up, or an insufficient base of aerobic bacteria that would be able to reduce ammonia quickly enough so that it does not impair the vital functions of fish and crustaceans. Ammonia is present in the aquarium all the time, the fish take care of themselves all the time and the organic matter in the aquarium decomposes all the time. That is why aerobic bacterial colonies that are building up in the aquarium are so important, as they constantly decompose this poisonous compound and nitrites to the least harmful form of nitrogen, i.e. nitrates (NO3). By using AZOO 11in1 Super Bio-Bacteria regularly, you will get strong, long-lasting colonies of nitrifying bacteria.

Different strains of bacteria contained in the preparations work in different fields, from cleaning gravel, filters and water, by removing harmful nitrogen, to improving the digestion and metabolism of animals in the aquarium. Therefore, for the maximum effect of water purification in aquariums and the exclusion of fish mortality due to poisonous nitrogen, especially ammonia, we recommend the simultaneous use of Azoo PSB, Azoo 11in1 Super Bio-Bacteria liquid bacterial preparations and Azoo NitriPro, Azoo NitraAct powder. The bacteria contained in the preparations work in various fields and complement each other.

Chlorine compounds are an important issue. In order to protect bacterial colonies that build up in filters, the substrate and plants that are in the water, you must remember that chlorine compounds kill bacterial colonies. Before each water change, topping up, etc., neutralize chlorine compounds. Patient aquarists will wait 2 days holding water in buckets. For the less patient, requiring the highest quality water, chlorine and heavy metals free of aquarists, we recommend the multi-purpose Azoo Aquaguard water conditioner, and with large amounts of chlorine or chloramine, which cannot be removed by leaving the water for 1-2 days, we recommend Azoo Chlorine & Chloramine Remover. Please do not forget to rinse and clean filter cartridges and pre-filters in water drained from the aquarium or dechlorinated water, not under the tap.