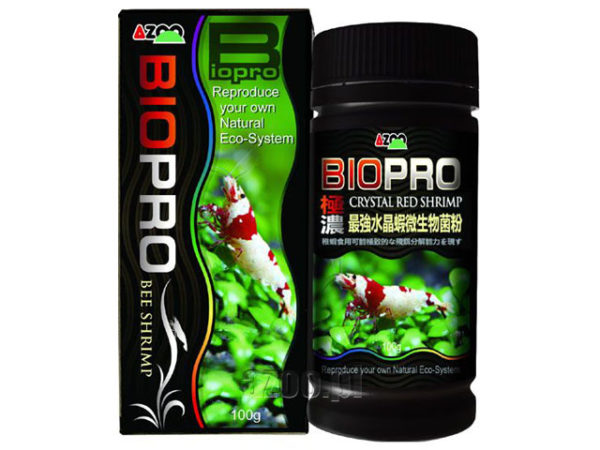 Only 1 left in stock

Azoo Crystal Red Shrimp BioPro is an advanced preparation containing 10,000,000,000 (billion) dormant powdered bacteria per 1g of product. Bacteria contained in Crystal Red Shrimp Bio Pro clean the water visually and biologically, removing proteins, foam and other impurities, as well as masses of impurities in the filter and substrate. The highest accumulation of aerobic bacteria quickly decomposes ammonia (NH3) and nitrite (NO2) into the least harmful form of nitrogen which is nitrate (NO3). The product quickly builds and strengthens the biological filtration system, limiting the harmful effects of ammonia. The highest accumulation of anaerobic bacteria helps to break down organic residues in the medium and filters, restoring them to their highest purity. Special probiotics inhibit the growth of pathogens, and specialized bacteria, which build up after application of the preparation in the intestines of shrimp, improve digestion and increase their vitality.

Azoo Crystal Red Shrimp BioPro consists of the largest number of strains of strong aerobic and anaerobic bacteria for maximum performance. The bacteria contained in the preparation are dormant and occur in a maximum concentration of 10 billion per 1g.

Azoo Crystal Red Shrimp BioPro should be used to supplement nitrifying and denitrifying bacteria and to establish or restore microbial balance, as well as to improve water quality, increase survival, reduce pathogen growth and improve shrimp conditions:
– in the new shrimp house
– in the already operating shrimp every week
– after changing water
– after each filter cleaning
– in the case of fat, foam on the water surface
– in shrimps with too many staff

AZOO CRYSTAL RED SHRIMP BIOPRO – description
1. Made from a concentrate of dormant powdered persistent bacteria in a dry environment and low temperature, with the highest ratio of bacteria, which are activated after 8 hours from application to water.
2. Specially designed in accordance with the requirements of Crystal Red shrimps, it consists of probiotics with several species of aerobic and anaerobic bacteria in the highest possible number and with the highest activity of 10,000,000,000 (billion) active bacteria per 1g of product.
3. It helps immediately after activation in the formation of beneficial bacteria in the shrimp intestines, for better digestion and absorption of nutrients, while increasing the vitality and activity of shrimp.
4. Quickly and effectively breaks down poisonous substances such as ammonia (NH4) and nitrite (NO2). Eliminates turbidity, bad smell, proteins, fats and foam from the water surface.
5. Breaks down debris and impurities in the substrate, improving the condition of the aquarium.
6. Effectively increases the pH buffer in the aquarium, minimizing the effects caused by large water changes or death of organisms in the aquarium.
7. The unique “Biocontrol-Biological Control” technology with special probiotic compounds inhibits the development of pathogens and significantly improves shrimp health.
8. Helps stabilize the aquarium (special algae), clearly promotes shrimp breeding and survival.
9. Contains special media. It helps the bacteria multiply quickly and absorbs dirt from the water.

DIRECTIONS FOR USE:
1. Add 2 grams per 100 liters of water when installing a new tank.
2. Then use every 5-7 days, 1 gram per 100 liters of water.
3. It is recommended to mix the powder well in a small amount of water in the bottle before adding to the aquarium. To get the best results, add the mixed powder evenly to the aquarium water, filter and filter media.
4. Scoop included for quick measuring 1g.

tips:
1. The preparation contains a nutrient medium for bacteria, so it will be visible after use.
2. Higher doses of the preparation can be used in situations of water change, or when the water quality is very low and requires cleaning.
3. For the best water purification effect, we recommend using together with “NitraAct”.