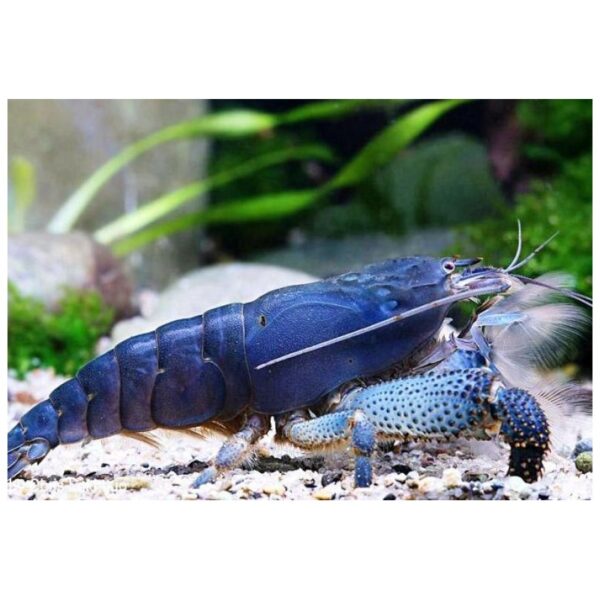 The Giant Fan Shrimp originates from fast flowing rivers with rocky substrates on the western coast of Africa from Senegal down to the Democratic Republic of Congo, and from the eastern coast of South America. It is not yet entirely clear whether these two populations are the same or whether they represent distinct species; this genus is not well studied and the South American population density is said to be very low. Most, if not all exports come from various West African countries. These large sized shrimps may appear rather fearsome at first glance, but they are actually very peaceful aquarium residents with modified claws (chelae) that resemble fans, which they splay wide like nets in order to catch tiny particles of food. A good sized, mature aquarium is required, with areas of vigorous current and plenty of shady hiding places. Some wood, flat stones and rocks should be placed in the path of the flow so that the shrimps may perch there, fanning the water for food particles. Good filtration, clean and stable water conditions, along with decent water circulation is obviously a must for this species. The current within the aquarium can be further enhanced by the use of small powerheads (be sure that the model you use comes with a protective cage or filter-sponge underneath to prevent the shrimp from being drawn into the motor). Giant Fan Shrimps are sociable and should be kept in large groups. On occasion, they may become a little territorial with each other; however, this is more noticeable in smaller tanks, which is why it is important to give them space. These shrimp can be kept safely with plants, although due to the water movement, hardier species should be chosen. Tankmates should be small and peaceful – avoid all pufferfish, large barbs, large aggressive botiid loaches, most cichlids etc. These shrimp are often seen in a variety of natural colours in the shops, from sky blue, mid blue, navy blue, to grey and brown. It is thought that the blue colour becomes much more apparent in harder water and when kept on darker substrates. There are also reports of the occasional male shrimp turning orange or red – this is thought to be a display of dominance, but further study is needed. Smaller specimens will moult fairly often, until they attain their adult size. Moulting usually takes place overnight, and the shrimp may hide for a few days afterwards whilst the new casing hardens, as naturally this is when they are at their most vulnerable to predators. Care must be taken when carrying out partial water changes, as Giant Fan Shrimp, like all shrimp species, are sensitive to fluctuating water temperatures. Try to ensure that the new (dechlorinated) water closely matches the temperature of the tank water. Some fish medications are harmful to shrimp and other invertebrates. If treatments do have to be used in an aquarium containing shrimp, ensure that it does not contain copper. These shrimp may initially be perceived as being of a slow and clumsy nature, however, they are actually very agile and are excellent climbers/escape artists. For these reasons, make sure your shrimp tank has tight fitting coverslides.

These shrimp filter micro-organisms from the water, along with tiny particles of fish food. The diet should be supplemented with tiny frozen foods such as cyclops, baby brineshrimp, daphnia, and microworm, along with regular feedings of zooplankton or phytoplankton, liquid fry foods, and ground-up flakes.

Very challenging. Although it is not uncommon to see eggs being carried by the females, raising the newly-hatched miniscule translucent larvae presents quite a problem as they require brackish water to change into miniature shrimp (known as post-larvae). The adults will not tolerate salt in the aquarium, which makes transferral and acclimatisation of the larvae into brackish conditions very difficult and risky. In nature, the larvae would be washed into saltier waters where they would develop whilst drifting in a planktonic state, and return to freshwater after several moults and taking on a miniature shrimp appearance. The miniscule size of the larvae means that an appropriately sized sponge medium must be used on the sponge filter in the brackish growing-on tank so that the larvae do not get dragged into the sponge filter. The larvae will not tolerate nitrate, so feeding can also present problems. Small amounts of green marine water are suggested as a first food.